Projects are in no particular order as they span a variety of topics and subject matter. If you have any further questions about the following projects, let me know. Documentation is somewhat limited in some aspects as it is often one of last things to do unfortunately, talking is faster than writing in some cases...

MIT 2.013 Systems Engineering Variable Temperature Cryocooler
In my mechanical engineering capstone course, my team developed a design for a crycooler with a large operating temperature range. This design requirement was imparted by our conversations with biologists and specialized pathologists who asked us about designing a freezer which could store a wide variety of different biological samples at very low temperatures. 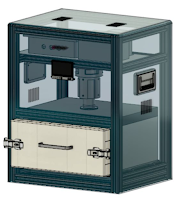 MIT 22.033 Neutron Detection Using Li-6:
As noted in the NSE article here, I worked on my capstone project for my Nuclear Science and Engineering degree which was a low cost neutron detector for use in agricultural moisture sensing. This project was taken on by a group of 4 including myself and was incredibly multidisciplinary. We travelled to Singapore to present our results and I enjoyed meeting engineers from the other side of the globe. 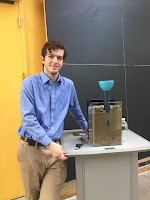 Electric Roller Chain Scooter
Most people building electric scooters today use hub motors. These designs provide great feedback control but sacrifice the ability to gear a motor mechanically. I received this frame as a handed down construct and then began making it my own by adjusting the motor controller, chain drive, and battery management system. 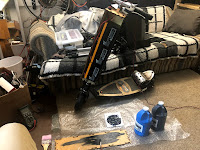 Single Source Laser Projection
I have worked on a combination of optics hardware and white, analog lasers from eBay. The goal for this project was to make a portable, cheap-ish laser projector that can take an input video and run a projection using a single point separated in time by the motion of 30 kpps laser galvos. 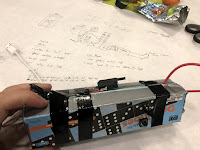 At HackMIT 2018, I fashioned a handheld prototype of a basic taser. The taser uses a small current, high voltage shock to deter conflict. I considered the fact that a taser could be turned against the owner, so I added another level of security such that the taser checks for whether the taser is still on the person (using a connection to the phone) and whether the taser has been allowed to turn on (via an app on the phone).


East Campus Handcar Work and Train Design
This past August, I worked on a design for a lawnmower powered train cart system for moving up to 20 people around (slowly). I used Solidworks extensively to figure out how to mate different framing structures together and to run simple FEA analysis on where the most stressed points in the structure existed. 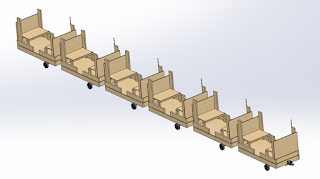 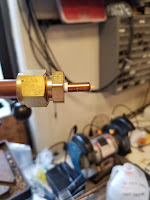 Over summer 2018, my friend Joseph asked me about using an array of stainless steel plates to generate hydrogen and oxygen gas via electrolysis. He proposed that we could use the generated gas to run a small torch. Similar projects can be found throughout the web.

In our version, we implement some solution chemistry by attempting to operate at a constant basic pH in the cells. This is done to lower the electrolysis energy barrier to produce more gas for a given battery output power.

We added a makeshift welder's torch handle to easily handle the ignited gas pathway. We used an arrester to avoid burn back into the gas cell.
Link for Further Documentation


Auxetic Spheric and Cylinder Structures:
While working in the Distributed Robotics Lab at CSAIL (Computer Science and Artificial Intelligence Lab) I was helping fabricate auxetic Structures under Post-doctoral researcher Jeffery Lipton. He shared a variety of ideas with me on their construction. It was very interesting yet quite challenging.
Link to Further Documentation

HV Power Supplies and Software
In a HV electrode testing application, I built a set of high voltage power supplies that could provide up to 1 mA at a selected voltage from -10kV to +10kV. The supplies were controlled by a software I wrote in Python's PyQt5 library. I employed a number of strategies I had employed in previous projects using C++. 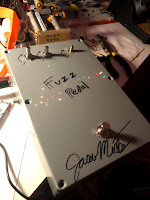 This contraption is resultant from my experiences in audio equipment. The pedal takes in a mono, 1/4" jack and outputs a signal that ranges in amplification, falter, and tremble. These qualitative words describe how the fuzz pedal can vary in the timber with changes to certain resistances (see potentiometers).
Link for Further Documentation.

A frame of Color Kinetics boards in a frame for outside viewing. Work in progress
Originally made by people on my living hall. Working on revitalization. GitHub link
Link for Further Documentation


IoT Reminder Buttons:
I have been using IFTTT.com and ThingSpeak to configure a set of buttons hooked to an ESP8266 circuit board to send JSON requests for emailing myself. The goal of this project was to learn more about IoT requests and keep myself from forgetting things. The buttons are placed next to my desk. If I want to send myself a reminder, I will write a note next to the button and tap it. In 24 hrs, I will get an email notification to look at the note next to my button. :)


Fish Food Autofeeder:
I got a fish in Jan. 2019. I am not the best keeper of other animals but I have done my darnedest to make sure that my fish (named Blue) lives the best life possible. While I went home at the end of Spring semester, I devised a hopper wheel structure to distributed food into his tank once each day to keep the fish alive. I used a spare Raspberry Pi to count the seconds from the last epoch and then send a signal to the servo on the hopper wheel which corresponded to only a slight turn, and slight distribution of food into the tank. 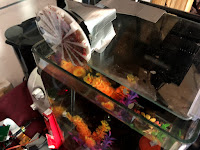 LED Lighting Setups
I have setup various LED lighting fixtures, using a AC-DC converter to run strands and single bulbs from wall sockets. This and other similar projects are in the works as I try to reduce battery powered things in my life in exchange for wall-powered systems. 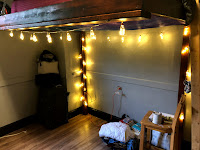 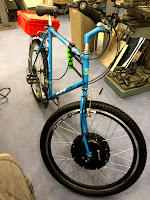 In 2017, I ordered an EBike kit from eBay. I used the hub motor from the kit and some additional parts to build an electric bike. The bike used upwards of 1 kW when speeding up. The goal of this project was to enable me to travel between places in the Boston region quickly and without causing myself too much stress.

The kit came in a 3' by 3' by 8" box and the wheel itself took up most of the space. The kit did not come with a tube, so I had to use one I had lying around. I received some great, A123 LiFePO4 batteries from my friend Dane.

I used a watt meter to figure out how much power I used to get from MIT to Harvard without any pedaling. The first kit I ordered had an issue with the hall effect sensors in the motor hub itself. I had to order a replacement part which wasn't too much of a hassle.

The bike is originally a Shogun Trail Breaker, I have thus named it the Shogun.
Link to Further Documentation 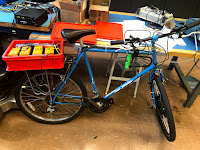 Restoring a Pumped Reed Organ
In an odd turn of events, some of my cohabitants acquired an old pumped reed organ from a local gentleman who no longer wanted to take care of it. Many of the veneer and hardware trim was falling off and the whole thing was coated in a thin distribution of dust and grim. After we scrubbed it down, my friends and I planned how to fix the various unique parts in this ole gem. 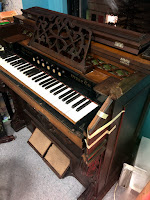